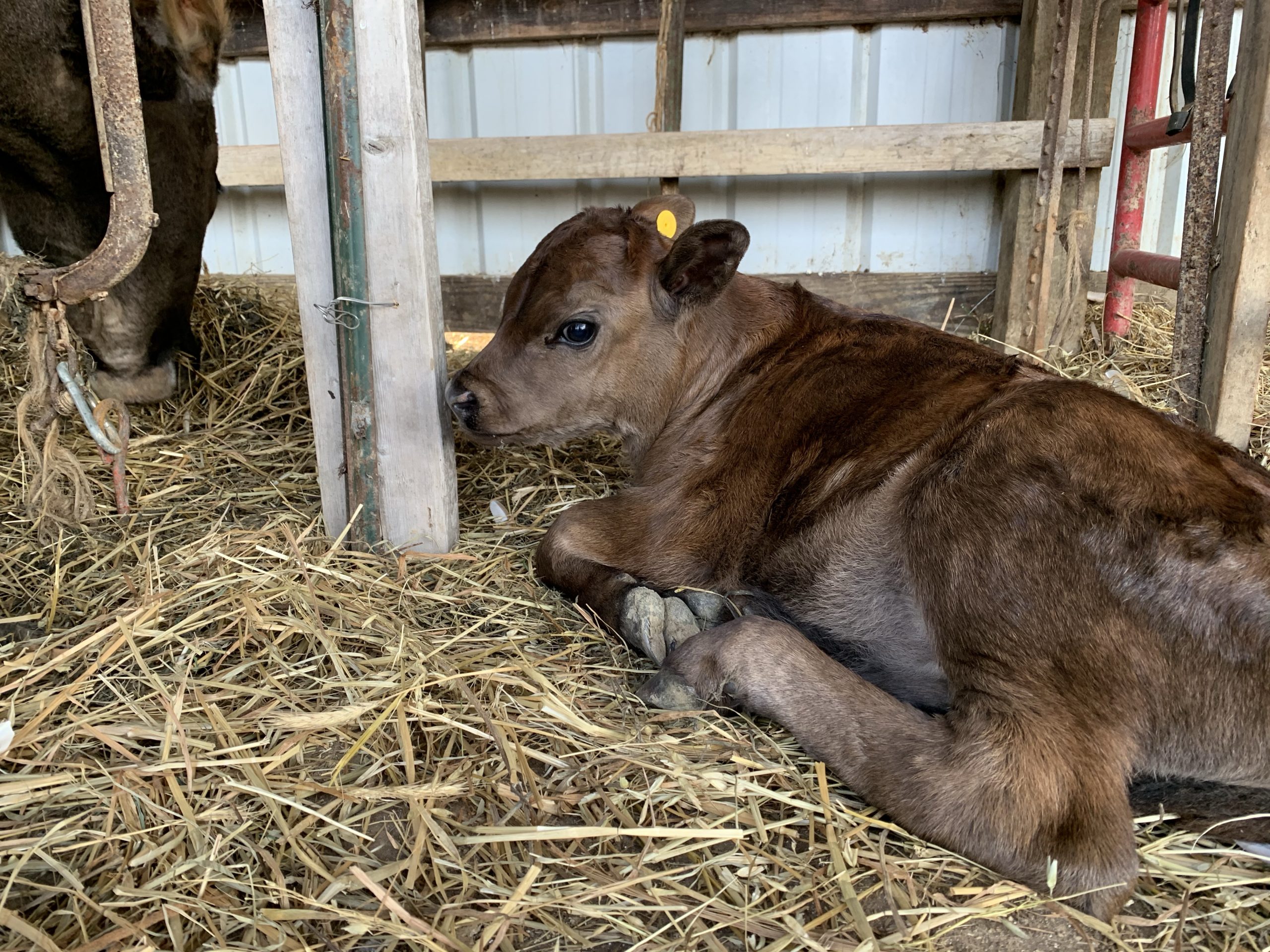 On March 31, about 12:30 p.m., with the sun shining bright and a cold north wind blowing, our beloved Jersey milk cow Bonnie gave birth to a bull calf.  We knew she was close by the way she had removed herself from the rest of the herd and kept getting up and lying back down.   The girls, watching her from the kitchen window, burst out of the house announcing, “Bonnie had her calf!” 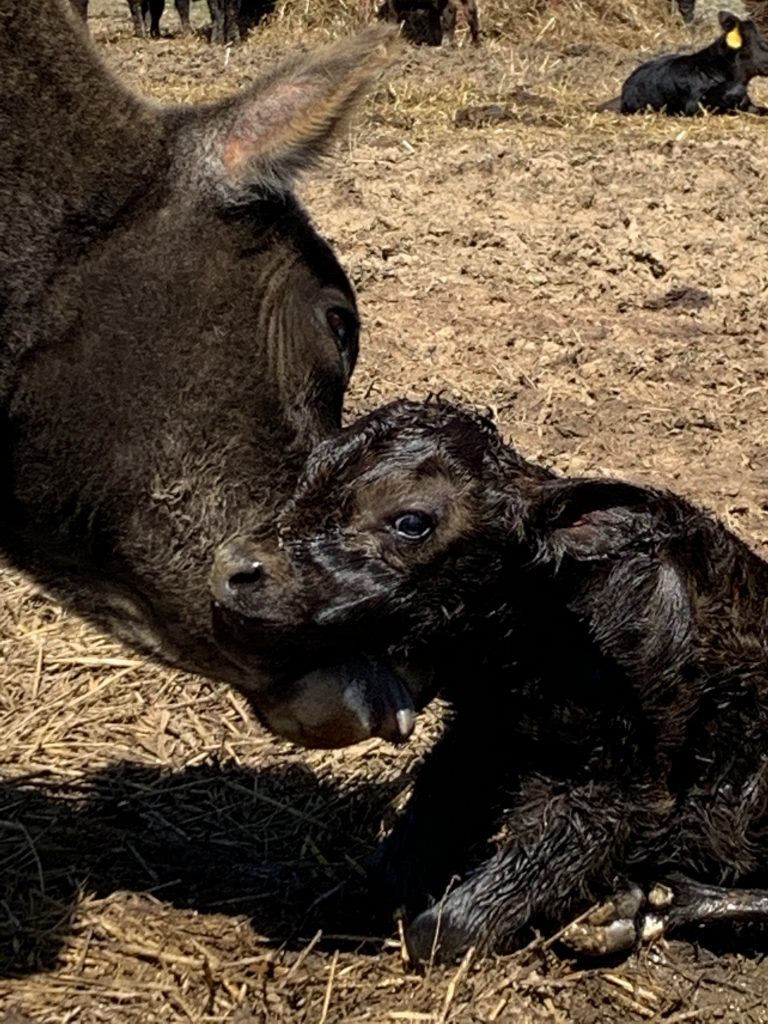 Being the good mother she is, Bonnie immediately went to work cleaning her baby.  Licking the calf vigorously, she constantly mooed encouragement to her calf.   We can only guess these gentle noises are intended to get the baby up and nursing.   The girls were all present to witness these first precious moments of the calf’s life.   Bonnie is so gentle and docile that she doesn’t mind having an audience even in the most excitable times. 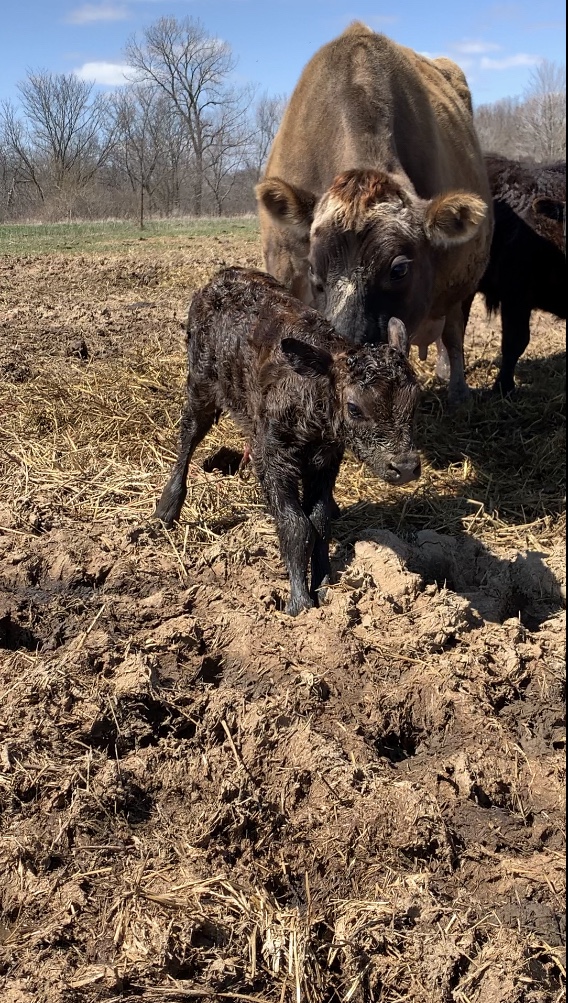 After about 20 minutes, the calf finally stood up on wobbly legs and held his position, getting stronger by the second.   More minutes passed and he was able to take a few uneasy steps.  Finally he was strong enough to begin looking for his first meal.

That’s when the trouble began.

Painfully, we watched as the little guy searched his mother’s body for that first precious drink of milk.  You must envision Bonnie: a classic Jersey cow, with an udder the size of a beach ball.  The milk was there!  Available!  Right there!!  But, even with our efforts to assist, he never latched on.   Bonnie’s udder was a gold mine of warm milk but our little calf just didn’t “get it.”  It was absolutely heart wrenching to watch this play out.

At 2.5 hours after the calf was born, we mixed up emergency powdered colostrum and fed the baby his first meal in a bottle.  Unbelievably, the calf’s first meal came out of a foil packet instead of his mother’s udder.   But, we couldn’t take the chance he would become weak and give up trying to eat.  It’s so critical the baby gets colostrum within hours of birth or the chances of survival decline rapidly.   A few years ago, we learned our lesson the hard way with another one of Bonnie’s calves.   Same thing – the calf searched for the teat but didn’t latch on.   Without the experience we have now, we let nature take it’s course and this proved to be completely wrong.  Bonnie’s calf died one week after birth, because we didn’t intervene in time.  Now we know to watch her calves closely and step in if there is trouble.  For some reason, Bonnie’s calves have a hard time getting started.

By the time the sun was getting lower in sky, the little calf had taken just 3 cups of colostrum.  The wind was biting cold and our concern grew as the little calf began to shiver.    He still had not latched on and was not interested in another bottle.  Bonnie stayed close to her calf making herself available for his attempts to nurse but he was not successful.  We put the calf and Bonnie in a protected stall with dry, deep bedding.    We tried another bottle but the calf just wouldn’t take it.   He seemed sleepy.  We left the pair for the night knowing the baby was probably going to sleep after such a big day but so worried about his well being.

At 5 a.m. the next morning, Lucy and Anita checked on the pair.  We had no idea what we were going to find and as we walked to the stall, we prepared ourselves.    It ended up the calf was fine but Bonnie was not.   When she stood up, Bonnie was quite unsteady on her legs and swaying a bit.   That could mean only one thing – milk fever – a dangerously low calcium condition caused by calcium being drawn away from the body as the milk production spikes after birthing.   Thankfully, we had quickly moved the calf to her side and he began to nurse!   Finally!   But, before he could get all he wanted, Bonnie had to lie down.  It was about 6 a.m. and Bonnie would remain down for the next 14 hours.

An early morning call to our vet advised us to get over to the clinic in Wyoming and pick up tubes of calcium.    The tubes contained a calcium paste we administered orally, one at 8 a.m. and another at 11.   After the treatments, Bonnie remained alert, but she was not able to get up.   She talked to her calf and he gave little pitiful cries back.  He had to be in a stall right next to her, separated in case one of Bonnie’s attempts to stand resulted in injury to the calf.  They were able to see each other and even smell noses.  She tried several times throughout the day to get up but she just couldn’t do it.   She’s a small cow but still has to weigh 900-1000 lbs.   That’s way more weight than we could move if the calf or even one of us got in trouble. 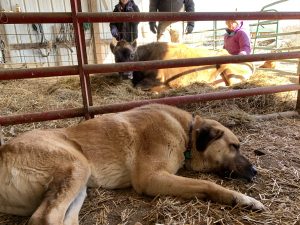 We watched our cow all day.   Even our dog Rascal kept vigil the entire day lying outside Bonnie’s stall and being a very good, quiet boy.  We sat with her during the afternoon sun when we all got very sleepy.  We must have been a sight – Bonnie, baby, one kitty cat, two dogs and 4 sleepy people.  Everyone was nodding off in the sunshine.    But, by 5 p.m., we were wide awake and very worried.  Bonnie was not improving and night was coming.

We phoned our vet.  He immediately realized Bonnie needed help.   An hour later, as our family stood around the stall, with the sun setting, chickens beginning to roost and her baby sleeping nearby, Bonnie received calcium through an I.V. into the jugular vain.  By the time the vet arrived, she had declined quite a bit and did not protest this treatment at all.    Her decline happened quickly and if the vet had not been able to get there, we quite possibly could have lost Bonnie.  It was a terrible thing to watch. 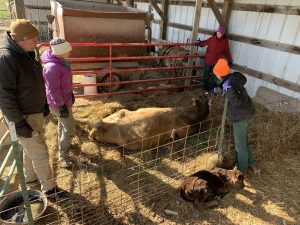 The calcium began to work and Bonnie perked up while our vet was still at the farm.  But, she still did not stand.  Our vet, who’s been practicing since Anita was in grade school, cautiously predicted she could stand in an hour if the calcium was able to pull her back from her deficiency.  We understood by his response there was no guarantee Bonnie was going to make it.

But, his prediction was right.

About an hour had passed, the farm was quiet,  it was completely dark and Bonnie and calf rested in their stalls.  A single bulb from a clip-on light burned giving us just enough light to see.   Laura and Anita watched over what looked like a peaceful barn scene, but there was plenty of stress in the air.   Anita worried out loud as the one hour mark approached and Laura replied with steady assurance, “Bonnie’s going to be okay.”  Not more than 10 minutes later, Bonnie became restless.  We knew the moment had arrived and she was going to try getting up.   Without much fanfare and at almost exactly an hour after her infusion, our cow stood up, rock solid on her feet.   Our jaws dropped and we couldn’t believe what we were seeing.   After 14 hours, Bonnie was standing!   And, beginning to eat!  She had not eaten any hay or drank any water since 6 a.m.

We immediately let her calf in with her and he got right down to business.    He drank and drank and drank his mother’s milk.  Such a beautiful sight and sound!   We had given him a bottle during the day, but he was hungry for mama’s milk.  This was his first real nursing – just about 32 hours after he was born.   Good Bonnie, she stood still letting her milk down for her baby, eating hay, mooing to her calf and and mothering as if nothing at all had happened.  We were emotionally wrecked and physically tired but Bonnie was fine.  She was fine and her calf was fine, too.   We just couldn’t believe it.

We ran to the house to announce the good news to our tired family.   Everyone came outside to see the sight for themselves.   There were many hugs and smiles as we watched mother and calf do what they do best.  They were bonding, calf was nursing, mother eating in a warm, dry stall on a crystal clear night.  It was an amazing moment on our farm and one we won’t forget. 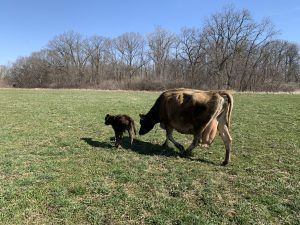 It’s been a week since this all happened and Bonnie and calf, now named Clovis, are thriving.   They spend their days together on our big green pasture.   They come in about 7 a.m. for milking  – Bonnie munching hay and Clovis lying nearby waiting for the milking to be finished.   Bonnie is 13 and this will be her last calf so we are especially watching and enjoying her mothering her baby.    She’ll retire to our pastures and live out her days here at the farm. 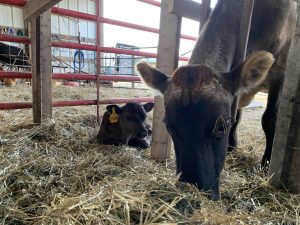 Bonnie is the first cow we’ve ever milked.  We knew nothing when she came to our farm.   The organic farm where she came from provided us with a raw milk share but the family decided to quit.  So, we bought one of their cows.   Our vet commented while giving the calcium I.V. that Bonnie must be a “a sweet ole cow.”  She is…..with a little vinegar thrown in!   She’s got a mind of her own but we’ve learned to coexist.  She gives us the most incredible Jersey milk and in return, she spends her days grazing her way around the farm.   You’ll never find a better mother and she’s been patient enough to let us learn the ropes of keeping a family dairy cow. 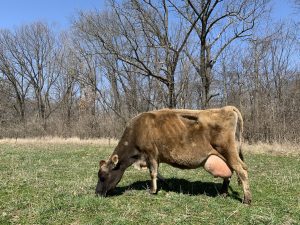 We’ve made just the first initial inquiries for a young Jersey heifer.  Laura is intent on befriending the heifer and getting her off to a good start.   We’ll keep you posted with our progress.

The book, Keeping a Family Cow, is our go to source for all information needed to tend and milk a Jersey cow.   The author, Joann S. Grohman, shares her extensive experience, love and knowledge of living and working with Jersey cows.   Her parting words, on page 262, really sum up her admiration for the family milk cow:

“I cannot discuss the cost and work of keeping a cow without also considering the true long-term investment in the health and appearance of my family.  The cost of my labor cannot be counted in this domestic economy.  Nothing else I might have done with my time could have matched the rewards I see.  Cows and grass are recession-proof and inflation-proof.  In difficult times, the family with a cow is not poor.”

It is true.  We are rich with real food and real life.  Bonnie provides our family with the most delicious, nutritious grass infused raw milk for drinking, butter, yogurt, cheese and more.   And, she gives us such fulfilling, no, soul-filling experiences we couldn’t find anywhere else but here on the farm as we’re up close and personal with these beautiful animals we love so much.   She’s part of the family and that’s the way it should be with the family milk cow.

We must recognize and sincerely thank the team at Wyoming Vet Clinic.   Without their immediate response, this happy ending would not be possible and we are truly thankful.